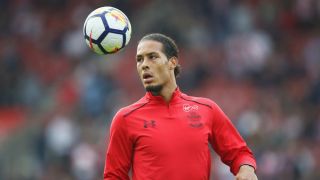 Virgil van Dijk insists he cannot allow his hefty Liverpool price tag to be a cause for concern.

The 26-year-old Netherlands centre-back became the most expensive defender in football history when Southampton sanctioned his sale to the Anfield club for £75million.

Van Dijk's move formally went through on Monday and he is keen to focus on his game as opposed to his eye-watering fee.

"It's only the market. The only thing I can do is just work hard, do the good things and be 100 per cent every day. That's what I definitely want to do – and I am going to do."

Liverpool fell short in a public pursuit of Van Dijk during the close season and, having long been a wanted man in the eyes of Jurgen Klopp, the former Celtic player is relishing working under the German tactician.

"Everybody from a Liverpool perspective knows how he is; how lively he is, how he can make players better and give them confidence as well," he said.

"It just suits me as well. I think he can make me a better player and I am just looking forward to working with him."

Van Dijk is ineligible for the New Year's Day trip to Burnley but could make his debut in the FA Cup derby against Everton on Friday.