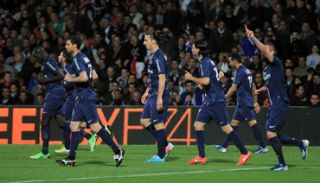 Jeremy Menez scored the decisive goal in the 53rd minute for Carlo Ancelotti's side as the wealthy Qatari-backed club secured their third league title.

They were last crowned champions in 1994, eight years after winning their first title under Gerard Houllier.

PSG coach Carlo Ancelotti, who has yet to confirm if he will stay at the club next term, added: "I'm very pleased because we have worked very hard this season. We wrapped it up against a good team. We deserved it and it's time to celebrate."

"I'm very happy to have won the title here in France," added the Italian, who has already won Serie A with AC Milan in 2004 and the English Premier League at Chelsea in 2010 as well as two Champions League titles with the Italian club.

PSG's victory gave rivals Marseille automatic qualification for next season's Champions League group stage by leaving them with a seven-point lead over third-placed Lyon, who have 63.

Lyon are in the final Champions League qualifying spot just three points ahead of fourth-placed Lille, who beat Stade Reims 3-0 on Friday, and Nice, who are fifth but were thrashed 4-0 at relegation-threatened Evian Thonon Gaillard earlier on Sunday.

That result sent bottom-club Brest into the second division by moving Evian seven points ahead of them and two points above the drop zone.

Saint-Etienne, the last side in the running for third place, slumped to a 3-1 defeat at Lorient, their first of the year in the league, leaving them stuck on 59 points in sixth.

PSG, who failed to beat surprise challengers Montpellier to the title last season and have showed signs of nerves in the last two games, collecting a total of four red cards, proved far more solid this time to seal the title at Lyon.

The hosts got their first opportunity after two minutes but Bafetimbi Gomis's header was brilliantly saved by Nicolas Douchez, who was replacing the suspended Salvatore Sirigu.

PSG's Ligue 1 leading scorer Zlatan Ibrahimovic, who has 27 league goals this season, almost hit back two minutes later but his effort was cleared off the line by full-back Mahamadou Dabo.

Both sides struggled to create chances in a game played at high intensity. Menez was closest to breaking the deadlock in the 23rd minute but Anthony Lopes saved his close-range effort.

However, the home keeper was helpless after the interval when the France forward was clear in the area following a lightning counter-attack and scored with a powerful strike.

After that PSG kept possession to stop Lyon equalising and, with David Beckham coming on in added time as they ran down the clock, held on to secure the victory that will see them collect the league trophy on Monday at the picturesque Trocadero place.