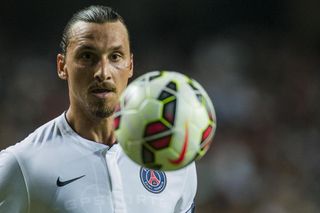 PSG have progressed deep into the Champions League in successive seasons after winning back-to-back Ligue 1 titles, reaching the quarter-finals of the premier competition two seasons in a row.

The French champions were eliminated 3-3 on the away goals rule in both quarter-final ties, against Barcelona (2013) and Chelsea (2014).

But Ibrahimovic, who scored 10 goals throughout PSG's 2013-14 European campaign, is confident Laurent Blanc's men can go all the way this season.

"I think we can win it. We have a good opportunity," the Sweden international striker told ESPN FC.

"This team is made to play in good tournaments. You need to work hard and to have a bit of luck with you.

"In the key moments, you need to have the small details on your side. I think we have that in our team now.

"We have more experience too, especially after last season. So we can do it."

PSG, who defeated Guingamp in the Trophee des Champions on August 2, have added to their star-studded squad with the signings of David Luiz and Serge Aurier.

"I think we are stronger than last year already," said the 32-year-old.

"It's not always the best team that wins the Champions League. Anything can happen in that competition.

"There are years when the winners are not the favourites at the start of the tournament. That's why it is so interesting."