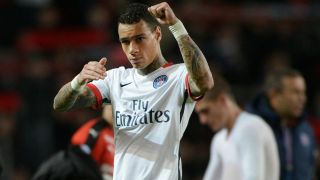 The Netherlands international was expected to call time on his four-year spell in the French capital at the end of the season, when his contract is due to expire.

And PSG announced on Tuesday that the 28-year-old will depart the club after their clash with Marseille at the Stade de France.

"After four seasons with the club, Netherlands international defender Gregory van der Wiel will leave Paris Saint-Germain," the club said on their official website as part of a lengthy tribute to his performances for the club.

Van der Wiel, who joined from Ajax in 2012, has won four Ligue 1 titles, three Coupe de la Ligue trophies and the Coupe de France during his time in France.

He has been linked with Serie A champions Juventus, as well as AC Milan and Inter.