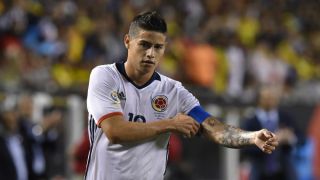 Paris Saint-Germain president Nasser Al-Khelaifi has denied suggestions the Ligue 1 champions are in talks with Real Madrid midfielder James Rodriguez over a transfer ahead of the 2016-17 campaign.

The 24-year-old endured a difficult season at Madrid under Rafael Benitez and Zinedine Zidane, partially due to injury, and has been linked with a move away from the Santiago Bernabeu side on more than one occasions.

Manchester United have been credited with an interest in signing the Colombia international, while recent reports suggested PSG have already sounded the attacking midfielder's camp out over a potential transfer.

Nevertheless, Al-Khelaifi has made it clear there is no truth in such rumours.

"It is not true that we have already spoken with James," the PSG supremo said at a news conference.

"We have not been in touch with James, nor have we spoken with Real Madrid. There has not been any contact with any one."

James has a contract with Madrid until June 2020.