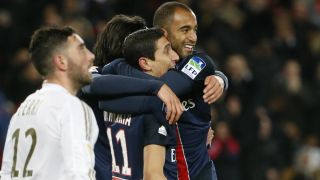 Laurent Blanc revelled in Paris Saint-Germain's progression to the semi-finals of the Coupe de la Ligue, while the Frenchman heaped praise on substitute Angel di Maria.

Two-time defending champions PSG will face Toulouse in the final four after Wednesday's 2-1 win over Lyon.

The match was deadlocked after Corentin Tolisso cancelled out Adrien Rabiot's 17th-minute opener, until Di Maria came off the bench and inspired PSG with 17 minutes remaining.

Di Maria broke from the halfway line and squared the ball to fellow sub Lucas Moura, who made no mistake inside the penalty area as a youthful Lyon outfit - certainly not overawed - came unstuck.

Speaking to reporters afterwards, Blanc said: "It's been a lovely evening, with two good teams, a good cup match. Both teams could have qualified.

"There were beautiful things. Both teams were very close. We cannot say that the qualification of Paris is undeserved.

"Lyon changed their coach [sacking Hubert Fournier last month and replacing him with assistant Bruno Genesio until the end of the season], also their system. I was pleasantly surprised by this Lyon team."

Blanc added: "There are things to review, but overall it's been positive. There were players, including South Americans, who were making their first match in 2016, and Javier [Pastore], it was almost the first of the season.

"Di Maria made the difference, he brought what he is capable of bringing. It's not easy to get into a match like that."

Under-fire striker Edinson Cavani played the entire 90 minutes but was subjected to whistles amid links with a move away from the French capital.

"This [whistles] is certainly due to his performance, that was not to the taste of supporters," Blanc said.