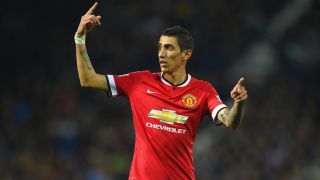 Paris Saint-Germain were the dominant force in French football again last season, but a repeat of their unprecedented domestic treble will not suffice for Angel di Maria ahead of his imminent arrival.

Laurent Blanc had to contend with questions over his future after the Parisian giants made an indifferent start to the 2014-15 campaign, but the former France coach went on to win Ligue 1, the Coupe de France and the Coupe de la Ligue.

UEFA Champions League glory eluded ambitious PSG, though, as they suffered a quarter-final defeat for a third consecutive year.

The French champions have not advanced beyond the last eight of the Champions League since 1994-95 and it was eventual winners Barcelona who ended their European adventure last season with a 5-1 aggregate victory.

PSG, who won the Trophee des Champions by beating Lyon last weekend, are poised to make Di Maria their marquee signing from Manchester United and the Argentina playmaker is determined to inspire a longer run in Europe's premier club competition.

He told BeIN Sports: "I am very happy to join PSG. What I know about PSG is that it is a team that won all the possible trophies in France last season.

"This is very important for the club. I also know that I want to overcome the obstacle that is the quarter-finals of the Champions League. I am going to try to bring the best of my abilities to put myself at the service of this team.

"We are going to try and go as far as possible in the Champions League."

Di Maria will be under pressure to justify his hefty price tag after a disappointing season at Old Trafford following his switch to United from Real Madrid for a British record fee of £59.7million last August.

While the acquisition of Di Maria will be a considerable coup, keeping Zlatan Ibrahimovic at Parc des Princes will be key to PSG'S hopes of making their presence felt in Europe.

The Sweden striker has been linked with United, Milan and a switch to Major League Soccer, but both he and the club have stated that the talismanic striker will not be on the move.

Ibrahimovic is expected to end his stay at PSG when his contract expires at the end of this season and it would be fitting if he fires Blanc's men to European glory next May.