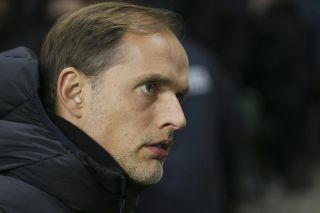 PSG produced a stunning second-half fightback to lead 4-3 through Mauro Icardi’s effort, having trailed 3-0 after 40 minutes.

But Amiens forward Guirassy fired home his second of the game in the first minute of added time to deny the French champions maximum points.

74' @MauroIcardi makes it 4-3! A lovely low ball to the back post from Bernat that the striker taps in! What a comeback! #ASCPSG— Paris Saint-Germain (@PSG_English) February 15, 2020

First-half goals from Amiens trio Guirassy, Gael Kakuta and Fousseni Diabate rocked PSG, who responded through Ander Herrera on the stroke of half-time.

PSG’s teenage defender Tanguy Kouassi headed home twice in five minutes to haul his side level and Icardi struck in the 74th minute, but Guirassy rescued a point for Amiens, who remain winless in the league since November 2.

Bordeaux moved up two places to sixth despite being held 2-2 at home by Dijon, for whom Mounir Chouiar struck twice.

Chouiar opened the scoring and after Bordeaux had turned it round through Hwang Ui-jo and Jimmy Briand, the Djion forward fired home an equaliser.

Nice also climbed two places, up to ninth, after a 2-0 victory at nine-man Toulouse thanks to goals from Pierre Lees-Melou and Christophe Herelle’s stoppage-time effort.

Toulouse pair Ruben Gabrielsen and Steven Moreira were shown straight red cards in either half for bad fouls, the latter’s upgraded by VAR.

Moussa Kone boosted Nimes’ survival hopes with the only goal at home against Angers, for whom Casimir Ninga was shown a straight red card for his second-half foul on Zinedine Ferhat.

Allan Nyom’s first-half effort for Getafe, who remain third, was ruled out by VAR for a foul before Antoine Griezmann and Sergi Roberto put Barca 2-0 up at the break.

Angel Rodriguez volleyed Getafe back into it midway through the second period and was denied a late equaliser by Barca goalkeeper Marc-Andre ter Stegen’s brilliant save.

Moi Gomez clinched Villarreal a 2-1 home win against Levante after Gerard Moreno’s early opener had been cancelled out by visiting striker Borja Mayoral.

Cucho Hernandez clinched Mallorca a valuable 1-0 home win against Alaves to lift his side one point clear of the relegation zone.

Atalanta opened up a six-point gap on fifth-placed Roma in Serie A after beating them 2-1 at the Gewiss Stadium.

Edin Dzeko gave Roma a half-time lead, but Atalanta hit back through Jose Luis Palomino and Mario Pasalic to stay fourth and extend their unbeaten league run to four games. The visitors slipped to a third straight defeat.

Bologna missed the chance to climb into a Europa League place as they lost 3-0 at home to relegation battlers Genoa and ended the game with nine men.

Stefano Denswil was shown his second yellow card in the closing stages for his challenge on Stefano Sturaro and Domenico Criscito converted the subsequent penalty.

In the Bundesliga, RB Leipzig halted a four-game winless run to return to the top with a comfortable 3-0 home win against Werder Bremen.

Bayer Leverkusen remain fifth after Karim Bellarabi’s stoppage-time effort snatched a 3-2 win at Union Berlin and Freiburg moved up one place to seventh after drawing 1-1 at Augsburg.

Wout Weghorst’s hat-trick helped Wolfsburg to a 3-2 win at Hoffenheim and Paderborn remain bottom after losing 2-1 at home to Hertha Berlin.