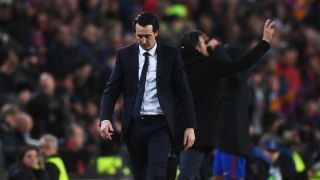 There's a curious sense of foreboding ahead of Europe's cup final weekend. While some coaches can look towards their match with eager anticipation, there are others for whom victory or defeat won't change a great deal.

Luis Enrique's final season at Barcelona will be judged unsuccessful even if they beat Alaves in the Copa del Rey. Thomas Tuchel's future at Borussia Dortmund is far from certain and lifting the DFB-Pokal will not change that. The Arsene Wenger protest brigade will not be silenced by an FA Cup final win over Chelsea, either, especially now that Champions League qualification has at last eluded Arsenal.

Unai Emery is in the same rickety, rudderless boat. Paris Saint-Germain will finish the season with three trophies to their name if they beat Angers in the Coupe de France final in the capital, having won the Trophee des Champions and the Coupe de la Ligue, yet few will consider the Spaniard's first term in charge to be a success.

This time last year, PSG were celebrating a fourth Ligue 1 triumph in a row. They finished 31 points clear of Lyon and Monaco, having swept all before them in the top flight. They had already won the Coupe de la Ligue and would promptly go on to complete their second domestic clean sweep in a row by beating fierce rivals Marseille in the Coupe de France final in Paris. It wasn't enough for the fans, though, and it certainly wasn't enough for their QSI owners, who sent head coach Laurent Blanc packing a month later. The "new cycle" – one that would see domestic dominance married to success in Europe – was entrusted to Emery, the man who claimed three consecutive Europa Leagues with the modest financial resources of Sevilla.

Training session at the Parc des Princes four days before Saturday's final ! May 23, 2017

Few predicted Emery would land the coveted Champions League in his first season but hardly anyone thought things would pan out as they have. PSG may have won the lesser two of France's top trophies, with the Coupe de la Ligue victory an emphatic one against Monaco, but they have otherwise been left standing as others in Ligue 1 have leaped forward. They scored fewer goals (102 to 83), conceded more (19 to 27) and ended up with a far lower points tally (96 to 87) in the league than they did last season, allowing a scintillating Monaco side to snatch the crown while Lyon, Nice and Marseille all improved.

They looked set to take a big step forward in Europe when they thrashed Barcelona 4-0 in their finest performance to date in the competition, but utterly and inexcusably capitulated in the last-16 second leg at Camp Nou to exit the tournament 6-5 on aggregate. To make matters worse, Monaco romped as far as the semi-final stage – hallowed ground as yet untouched by PSG. The man brought in to solve the European conundrum instead made it look more confounding than ever.

It has been far from a disaster of a season, of course. PSG were hugely impressive in dispatching Monaco 4-1 in the Coupe de la Ligue and the Barca victory showed Emery has the blueprint to bring down Europe's elite. He has also brought the best out of Edinson Cavani, who says he feels "a lot more free" and has plundered 49 goals in as many games after taking on Zlatan Ibrahimovic's mighty mantle, while Angel Di Maria has showed signs of becoming one of the world's finest attacking midfielders again.

The signing of Julian Draxler looks like a masterstroke, while Giovani Lo Celso was a shrewd addition for the future, and a renewed focus on in-house young talent is bearing fruit; Adrien Rabiot is blossoming, Christopher Nkunku has made an impact and Presnel Kimpembe looks every inch a world-beating centre-back in the making.

PSG have only had six defeats all season and it remains highly unlikely that they will endure a seventh. Angers finished 41 points behind them in the table and twice suffered routine 2-0 defeats, the most recent on April 14. Another (albeit lesser) treble will more than likely come PSG's way and it is undeniable that such an achievement in a coach's first season would, ordinarily, deserve the highest of acclaim. Jose Mourinho will tell you that.

But PSG, like Manchester United, are not ordinary. Their ambitions are not ordinary. Emery is not ordinary. This is a renowned, successful individual who was supposed to lead the club to the highest level in their history. He fell short with his first attempt; winning on Saturday may not be enough for him to be given a second.