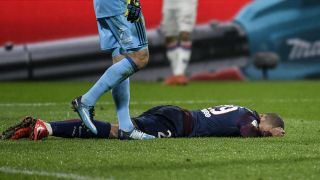 Kylian Mbappe has assured Lyon goalkeeper Anthony Lopes he bears no hard feelings after a painful clash between the pair saw the PSG forward leave Sunday's Ligue 1 encounter on a stretcher.

Spectacular goals from Nabil Fekir and Memphis Depay either side of a blistering Layvin Kurzawa volley gave Lyon a 2-1 victory, inflicting only a second top-flight defeat of the season on Unai Emery's table-toppers.

But thoughts post-match turned towards Mbappe, with the teenager having received lengthy treatment on the field during the first half after pursuing Marco Verratti's raking pass and colliding with the on-rushing Lopes.

"Just a message to tell you that I'm fine," he tweeted.

"It was more fear than harm despite the impressive shock – without a grudge, A. Lopes.

"And thank you for all your messages."

Mbappe will hope to be back in action on Wednesday, when PSG host Guingamp in the Coupe de France.