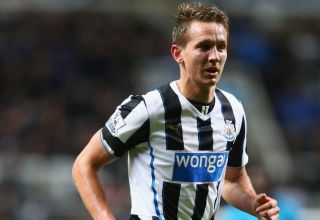 De Jong moves to the Philips Stadion on a five-year contract following an unsuccessful spell with Gladbach.

The Netherlands international joined Gladbach in 2012 following a prolific stint with Twente, but struggled to find form at Borussia Park.

The 23-year-old netted just eight times for Gladbach in two years with the Bundesliga side.

A loan to Premier League outfit Newcastle United could not revive his fortunes, De Jong failing to score in a four-month spell at St James' Park in the second half of last season.

It had been rumoured that De Jong could join elder brother Siem at Newcastle after the attacking midfielder made the move to Tyneside from Dutch champions Ajax earlier this month.

However, it is PSV - who finished fourth in the Eredivisie last season - that have shown faith in De Jong by bringing him back to his homeland.

"I want to get back on the field and show my qualities," De Jong told PSV's official website.

"The talks with PSV were very positive and I'm looking forward to playing here."