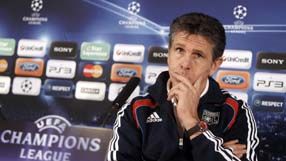 Ronaldo, who missed Real's last two La Liga matches with a leg muscle strain, was included in the squad for the last-16 second leg at the Bernabeu, though coach Jose Mourinho would not reveal whether his Portuguese compatriot will start.

The former World Player of the Year trained normally with the squad on Tuesday and is likely to return as the nine-times winners seek a place in the quarter-finals for the first time since 2004 after last month's first leg in France ended 1-1.

"It would be positive if Real Madrid could play with all their best players so that beating them would be worth even more," Puel told a news conference on Tuesday before the Ligue 1 side attempt to eliminate Real for a second straight year.

Lyon have been a thorn in Real's side in European competition. As well as knocking them out of the Champions League at the same last 16 stage a year ago, the La Liga giants have failed to beat the French side in seven meetings.

If the Real-Lyon tie is finely balanced, Chelsea look well placed to reach the last eight at the expense of FC Copenhagen after they won 2-0 in the Danish capital last month.

"In the first game we played really well and we needed a high tempo to play against them," Carlo Ancelotti, the coach of the west London club, said at a news conference on Tuesday.

"We have to stay focused because they will come here and want to do everything to win," the Italian added.