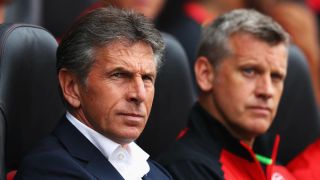 Southampton manager Claude Puel does not want his players to become consumed by the occasion when they face Inter at San Siro in Group K of the Europa League.

Puel's side have enjoyed an impressive start to the season and are unbeaten in their last seven matches across all competitions, winning five.

It is a run of form Puel's under-fire Inter counterpart Frank de Boer would dearly like to call his own, but travelling to one of Europe's most iconic stadiums for a maiden encounter with Serie A opposition could throw up pressures for Southampton that their French boss is keen to play down.

"I think this game is very important, but it’s one of the games for the qualification," he said at a pre-match news conference.

"It's important to stay with good concentration for every game of this Europa League. Of course, to play away at Inter is exciting, but this is just a game for us.

"It's important to try to take the three points. The result is very important now for qualification.

"Of course, it's a great team with great players, but we need points, and it's the same for this team."

Inter head into the match without a point to their name in the competition and on the back of three straight defeats, the last of which against Cagliari was marred by hostility from the Curva Nord ultras towards captain Mauro Icardi.

"When a team needs points, the fans sometimes are angry and it's the same for all of us," Puel said when asked about the situation. "It's good to concentrate on us."

Playmaker Dusan Tadic has established himself as a key man under Puel and the Serbia international is relishing the opportunity to display his prime form on a grand stage.

"I expect an open game because both teams like to play good football and dominate possession," he said.

"I feel really good physically. In the national team and here the coaches give me a good role. We can become better and better.

"It's special [to play at San Siro]. Everyone gets more motivation. It'll be nice to play here and show our football."