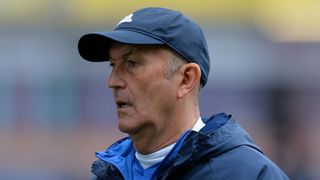 West Brom boss Tony Pulis is determined to prolong Chelsea's wait to be crowned Premier League champions when the sides meet at The Hawthorns on Friday.

The Blues will win a second title in three years with victory on Friday, having opened up a seven-point advantage over second-place Tottenham with only three matches to spare.

The Baggies' form has dipped dramatically since they reached the fabled 40-point mark in February.

West Brom have won just once in nine league matches since beating Bournemouth to reach that total, but Pulis – while admitting Chelsea deserve to win the title – insists his side can ensure the champagne remains on ice for Antonio Conte's men.

"They deserve to be where they are, they've been the most consistent team in the league this year and they come to our place with a chance of winning it," he told a pre-match news conference.

"Whether they celebrate on our pitch or back at Stamford Bridge, they deserve to be where they are for what they've done so far.

"We'll give it our best. We have a responsibility to our supporters. We're still chasing a points tally that will keep us in eighth position so we have a lot to play for.

"We're looking forward to the game, the players have been very good this week.

"There's three points riding on it for them and us," he said. "We're doing our damndest to make it a competitive game and a good game. I don't think Antonio will expect anything different."

Taylor, who according to Leeds boss Garry Monk refused to face Wigan Athletic in their final Championship game, is out of contract at Elland Road, but will command compensation.

"Obviously he's been on our radar for a bit. It could go to a tribunal but our club would rather try and sort a deal out with Leeds if we're going to do it instead of going to tribunal."