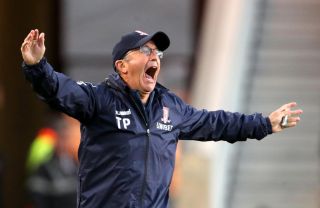 Middlesbrough manager Tony Pulis was bitterly disappointed to see his side miss out on the play-offs despite their 2-1 win at Rotherham.​

Boro finished a point outside of the Sky Bet Championship’s top six after Derby managed to defeat West Brom on a frantic final day of the season.​

The Teessiders, knowing they had to win to stand any chance of continuing their season, did their bit with Britt Assombalonga on target from the spot and skipper John Obi Mikel also netting in the first half.​

Pulis said: “I thought we played really well first half and once again it’s another half where once again we should have come in with a few more goals.​

“Second half was a rollercoaster because of the crowd. We’ve won five out of the last six games. We had a poor performance at Forest but the rest of the time they’ve really dug in and taken it to the last couple of minutes.​

“The players have got to take a lot of pride.​ They’ve really, really worked hard and as I say, to win five of the last six games is great credit to them.”​

Decisions will now be made on the future of the playing squad – as well as Pulis – now Boro know they will once again be in the Championship.​

The Welshman, who will sit down with owner Steve Gibson in the coming days, said: “We were hoping and praying to come out of this ground in the play-offs. That has been the overriding thing.​

“Steve (Gibson, the owner) has paid me to get a grip on the football club and I have tried to do that in a way that helps this club.​

“The job’s the job. I have been managing for 30-odd years. It’s not the first job I have been at where I have had to balance the books. I was doing that at Bournemouth in 93-94.”​

Rotherham manager Paul Warne was proud of how his players kept going through the second half.​

He sees encouraging signs ahead of another season in League One and said: “It was a microcosm of the season. We were excellent from box to box but not good enough in both boxes to win the game.​

“Take the game away from it, I thought my team were excellent.​

“The lads gave everything they could to keep the integrity of the league going. We knew at the start of the season when the fixtures came out that the last eight or 10 games didn’t exactly look kind.​

“I was glad we got a goal for our fans to have something to cheer about. ​

“For us to compete as well as we have gives me real pride.​

“There will be three very good teams stay behind after the play-offs in League One. ​

“Then there is going to be us, Bolton and Ipswich. It’s going to be a really tough season and hopefully with a good wind and the odd refereeing decision going our way here and there we might be where we want to be.”