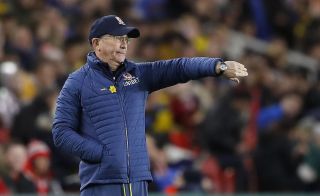 Tony Pulis praised his Middlesbrough side for responding to an early setback to remain in the promotion mix with a 2-1 victory over Reading.

Boro’s victory left them level on points with sixth-placed Derby, who beat Bristol City and have a game in hand against Swansea on Wednesday.

But Pulis’ side did what they needed to to stay in contention as Lewis Wing’s equaliser and Britt Assombalonga’s 39th-minute penalty turned Saturday’s match in their favour.

Wing’s goal cancelled out Danny Loader’s brilliant opener in the 11th minute for Reading and ensured he marked his return to action in style after recovering from hernia surgery.

Pulis said: “We can’t do anything about Derby. They’ve got three points against Bristol, now they play Swansea, what we’ve done is kept the pressure on.

“If we hadn’t have won that would have been it. We’ve won so there’s pressure on them going into the next two games. Football is a funny old game.

“But the reaction was fantastic. At half-time we’re coming in and I know we’ve scored two, but you’re wondering how we haven’t scored three, four or five.

“I kept Wingy on, I should have brought him off. I apologised to him because he was tired, but I wanted him to get that 90 minutes.

Despite losing at the Riverside, Reading, for whom 18-year-old Loader scored his first senior goal, are now mathematically safe following Rotherham’s defeat at West Brom.

They had already effectively secured their place in the Championship for a further year before the trip to the north east, but the fact it is now guaranteed pleased manager Jose Gomes, who only took over in December.

Gomes said: “Finally we are mathematically in a safe position, but we deserve it. It is a result of club work, not a personal achievement, from the owner, chief executive, all the players, employees.

“It was very hard work, but the players did what they should do and here we are preparing next season in the Championship now. We have already started that hard work and I am looking forward to next season already.”