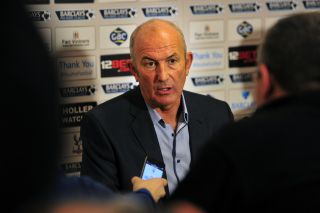 The former Stoke City boss was named as Ian Holloway's successor on Saturday and watched his new side beat Hull City at the KC Stadium 1-0 on the same day.

It was only Palace's second win of the season but ensured they moved off the foot of the Premier League table, although Pulis has not yet discussed potential additions in January.

The 55-year-old is also uncertain as to the style of play he will adopt at Palace.

"I watched the lads on Saturday and their energy and commitment was superb," he said. "They will give everything they've got for Palace.

"People throw players names at you and you have to deal with it but I haven't spoke to the chairman about targets in January. The way you play is determined by the players you've got. Ask me in a couple of weeks once I've worked with the players and I'll know.

"What we've got to do is make sure we prove people wrong. The greatest thing this weekend was us getting three points."

Co-chairman Steve Parish added that Pulis will be tasked with helping change the philosophy around the club as well as keeping them in the top flight.

"We need to change the mindset at the club to a Premier League club. Tony has helped do that before with Stoke," he explained.

"We are on the same page with most things. I took my time, looked around, and I think came up with the right decision. It feels very positive right now."