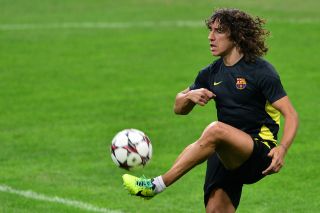 Champions Barcelona hold a one-point lead over Atletico Madrid at the top of the table after nine games, with Real Madrid three points behind Gerardo Martino's side.

All eyes will be on the first meeting of the season between Barca and Real this weekend, but fit-again centre-back Puyol insists it is too early for the eagerly-anticipated encounter to be considered decisive.

"It won't decide the league title. There's a long way still to go. But it is a good opportunity to play well and gain confidence." Puyol told a press conference.

The Catalan giants have not beaten Real in the Spanish top flight since December 2011 and Puyol hopes to play his part in ending that sequence of results.

The 35-year-old returned for last weekend's draw at Osasuna after spending a frustrating seven months on the sidelines due to a knee injury and is available to face Carlo Ancelotti's side.

"I'm in great shape. The feelings are good. I'm available to the boss." said Puyol.

"Real Madrid always demand the most from you. They're playing better and better. We'll have to be at our best to beat them.

"We know they're dangerous on the break. We know them very well."