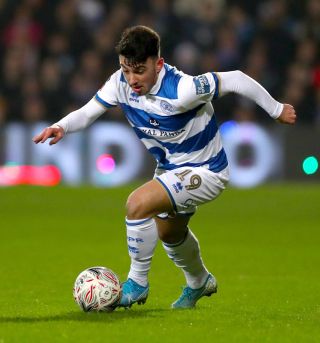 Stoke’s Sky Bet Championship relegation fears worsened as they squandered a two-goal lead in a 4-2 defeat at QPR.

There were four goals in the space of 11 first-half minutes at the Kiyan Prince Foundation Stadium, where Sam Clucas and Tyrese Campbell scored to put Stoke in command before Jordan Hugill netted and Ebere Eze then hauled Rangers level.

Bright Osayi-Samuel put QPR ahead with 20 minutes remaining as the winger darted to the left-hand byline and evaded Danny Batth before firing into the far corner from a seemingly impossible angle.

And substitute Ilias Chair sealed Rangers’ win in injury time by tapping in the loose ball after Ryan Manning’s shot had been parried by keeper Jack Butland.

For all their exciting attacking play, QPR’s season has been blighted by missed chances and shambolic defending and both were evident again before Clucas’ 27th-minute opener and Campbell’s goal three minutes later.

Stoke were on the front foot from the start and Campbell sent a volley wide before being presented with a chance after an error by Yoann Barbet.

Nick Powell dispossessed Barbet and threaded the ball through to Campbell, who was denied by keeper Liam Kelly.

The hosts responded and should have gone ahead, but Stoke were let off the hook by an incredible miss by Hugill and Marc Pugh also missing a sitter.

Eze linked up nicely with Manning, whose cross form the left went beyond Butland only for the stretching Hugill to nudge the ball over from a couple of yards out.

Eze and Manning then combined again, with Manning’s clever flick setting up Pugh, who sent a weak effort straight at Butland.

Clucas, on the other hand, was clinical when he put Stoke ahead, beating both QPR centre-backs before applying the finish. He turned away from Barbet and inside Grant Hall before shooting beyond Kelly.

Campbell was equally ruthless, collecting Powell’s pass near the left edge of the penalty area and firing home.

Hugill atoned for his earlier miss by pulling a goal back after 34 minutes with a first-time strike from the edge of the six-yard box after being set up by Manning’s clever pass in behind the Stoke defence.

Hugill was also involved in the equaliser, scored by Eze four minutes later. After Osayi-Samuel had battled to work the ball towards him, Hugill laid if off to Eze, whose composed finish gave Butland little chance.

Rangers would have gone ahead but for another incredible miss from close range, this time by Hall, who shinned the ball over after Eze’s corner had dropped to him.

QPR were the better side in the second half and Butland produced saves to deny Hugill and Eze before Osayi-Samuel struck.

Osayi-Samuel was then guilty of the third Rangers miss from near the goal-line when he somehow failed to hit target when found unmarked at the far post by Angel Rangel’s cross.

Chair, though, made no mistake in the final moments.