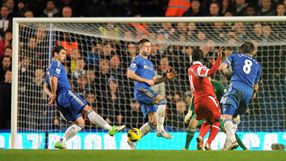 Wright-Phillips smashed home a low strike after 78 minutes to deny Chelsea third spot and help the other West Londoners draw level with Reading at the bottom of the table on 13 points with only their second Premier League win.

"They worked their socks off and they got their rewards, we deserved it and it was a fantastic performance. We restricted them," QPR boss Harry Redknapp told the BBC.

"They have set the standard tonight and to get out of this mess they have to do it every week."

Chelsea, with a game in hand on leaders Manchester United and third-placed Tottenham Hotspur, have 38 points from 20 matches and trail the table-toppers by 14 points and Spurs by one.

A Luis Suarez double for Liverpool helped the Uruguayan move one goal behind Premier League top scorer Robin van Persie in the scoring charts as Liverpool swept Sunderland aside 3-0 at home.

Everton climbed above Arsenal into fifth place on 36 points from 21 games with a 2-1 comeback win at Newcastle United, who sit two points above the relegation places.

Visitors QPR took advantage of a weaker Chelsea side, interim manager Rafael Benitez opting to rest Juan Mata and Eden Hazard, as they won their first away game of the season to delight their ecstatic supporters at the final whistle.

Chelsea dominated possession and nearly broke the deadlock midway through the second half when Frank Lampard had a goal disallowed for being offside as he fired in a low shot.

Branislav Ivanovic grazed the crossbar with a header after half-time as Chelsea pushed for an opener, but QPR were well organised and defended doggedly and took their chance when it came.

Adel Taarabt always looked lively and it was a well-controlled lay off from the Moroccan which set up winger Wright-Phillips on the edge of the box to drive a fierce low effort beyond reserve goalkeeper Ross Turnbull.

Wright-Phillips spent three inconsistent years at Chelsea between 2005 and 2008 and his career has stuttered since, prompting him to lose his England squad place.

QPR manager Harry Redknapp's gamble to play Taarabt up front instead of his usual position wide or in the hole paid off handsomely.

"I have never played in that position in my life. I was surprised when the manager told me I will be playing there," Taarabt told the BBC.

Redknapp added: "We worked on it yesterday morning in training."

QPR narrowed the gap to 17th-placed Southampton to five points with 17 matches left while Newcastle, in 15th, are seven points away.

Chelsea, lucky not to have league debutant Marko Marin sent off for a rash early tackle, had been in excellent form coming into the game but the defeat again exposed their lack of options up front and a deal for Newcastle striker Demba Ba cannot come soon enough for fans.

"We can't carry on with the same players every game. You have to trust your players, but we were a little bit