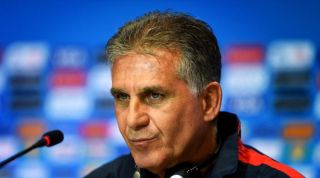 The Asian nation went into their final Group F match against Bosnia-Herzegovina knowing they had a chance of qualifying if they won emphatically and Nigeria lost to Argentina.

However, the game did not go to plan as Bosnia secured a 3-1 win to leave Queiroz's men bottom of the table.

Reza Ghoochannejhad scored Iran's only goal of the tournament in the second half, but it was not enough as their exit was confirmed by strikes from Edin Dzeko, Miralem Pjanic and Avdija Vrsajevic.

The former Portugal boss is the latest head coach to have guided Iran to the finals but failed to get them out of the group, and he was left to rue the Iranian Football Federation's decision not to offer him a new deal.

"I've shown my commitment to this project, but I haven't received any new contract offer over the past 11 months," Queiroz said after the defeat in Salvador. "It's been an honour for me to work for Iran, I've fallen in love with the country.

"But you can't have a marriage when only one side wants to commit.

"I waited for them to make an offer, but I haven't received anything, so today I've come here to say 'thank you' to those who gave me the opportunity to do this job.

"I will always have Iranian football, my players and the fans in my heart."