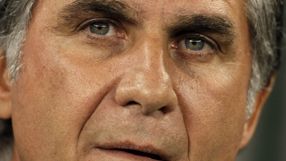 Queiroz was suspended by the Portuguese anti-doping agency ADoP for six months on August 30 after insulting the officials during their surprise visit to Portugal's training camp in May before the World Cup.

The Portuguese Football Federation (FPF) fired Queiroz, who had two years to run on his contract, in September and replaced him with former Sporting coach Paulo Bento.

Swiss-based CAS, sport's highest tribunal, described those comments in its ruling as "unacceptable" but concluded his behaviour had not disturbed the work of the anti-doping officers.

Queiroz, 58, said he had been the victim of a personal vendetta and that ADoP president Luis Horta should be fired.

"There couldn't have been any other decision, my conscience was clear," Queiroz said in an interview with Radio Renascenca.

"This was the answer I wanted to give to my parents and family, I can now at least leave Portugal in peace."

"I'd like to invite (FPF president) Gilberto Madail to advise me what my next personal and professional steps should be," he added.

"He (Horta) should be sacked immediately along with the doctors who took part in this personal vendetta, this conspiracy."

CAS said it accepted Queiroz's appeal because he had not interfered in the anti-doping process itself.

"While the panel found the behaviour of Mr Queiroz unacceptable, it did not find that such behaviour disturbed the sample collection process or the work of the anti-doping officers," said CAS.

"It was indeed undisputed that the players were not in the vicinity of the incident and thus none of them were directly involved. Furthermore, there was no evidence that Mr Queiroz' behaviour was intended to disturb the doping control."

CAS said in its verdict there was a discussion with the anti-doping officials and "Mr Queiroz uttered some very distasteful and sexually descriptive comments regarding the mother of the ADoP president".

Queiroz, who has also coached South Africa, Real Madrid and United Arab Emirates, said last year he would demand compensation from the FPF if his appeal was successful, although he did not comment on that in Thursday's interview.

Queiroz's sacking came after an unimpressive performance by Portugal at the World Cup in South Africa where they lost to Spain in the last 16 and failed to score in three of their four games. The exception was a 7-0 win over North Korea.