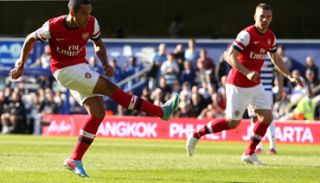 Walcott pounced in the late kick-off at Loftus Road in West London just moments after Gareth Bale, newly crowned English player of the year, had celebrated a spectacular winner as Spurs beat Southampton 1-0 in North London.

Bale cut inside from the right and held off a defender before firing home from 25 metres in the 86th minute against his former club.

At the bottom of the table, Wigan Athletic and Aston Villa also celebrated late victories to improve their chances of avoiding relegation to the Championship.

Callum McManaman scored in the 80th minute at the Hawthorns to give Wigan a 3-2 win over West Bromwich Albion after Roberto Martinez's team had twice fallen behind.

Villa left Carrow Road with a 2-1 triumph over Norwich City courtesy of Gabriel Agbonlahor's double, including the 89th-minute winner.

With Newcastle United drawing 0-0 at West Ham United, the relegation picture is also tight and unpredictable.

Just five points separate eight clubs between Wigan, in 18th place and the third relegation spot, and the Potters, who are 11th.

QPR and Reading, who beat Fulham 4-2 at Craven Cottage on Saturday, are already down.

The big winners in the relegation battle this weekend were Villa, who moved up to 13th place on 40 points, the tally traditionally considered the minimum required for survival in the Premier League.

Agbonlahor notched his fourth goal in as many games to give Villa manager Paul Lambert a triumphant return to former club Norwich, who are now 15th and just three points above the drop zone.

"Our effort after playing on Monday night [in a 6-1 victory over Sunderland] was outstanding," Lambert told the BBC.

"Agbonlahor has been playing excellently for us. He has the speed to hurt teams, and power as well.

"We have to keep going but it's another huge, huge win. This team is getting better and better every single game."

FA Cup finalists Wigan are aiming for another late-season escape, and their cause is helped by the fact they have a game in hand over their rivals.

"We showed our character and never accepted defeat," Martinez said. "To come back twice from behind at a place as difficult as this is huge.

"We have worked really hard for two months to get us in the position where, with two weeks of the season left, we are still involved in two competitions. If we stay up it would be like winning the title."

Newcastle felt they should have had three points at Upton Park after a Papiss Cisse effort midway through the first half was ruled not to have crossed the line.