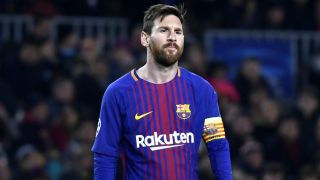 Ivan Rakitic hailed the importance of Lionel Messi following his renewal, while the midfielder said it is important Barcelona look after the club's all-time leading goalscorer.

Messi finally signed a new deal to remain at Barca until 2021, with a €700million buyout clause included last month.

The five-time Ballon d'Or winner has been in sparkling form this season, scoring 17 goals in all competitions, including a LaLiga-best 13.

Messi was rested by Barca head coach Ernesto Valverde in Tuesday's 2-0 win over Sporting CP, with qualification for the Champions League last 16 already secured, and Croatia international Rakitic stressed the importance of keeping the 30-year-old fresh.

"Sometimes he should rest. To play with him is always special and when he has 20 to 25 minutes too he can change the game and the play completely.

"It's good that he was good in this game and we have to look after him well."

Returning to full fitness following a hamstring injury, Mascherano – contracted until 2019 – is reportedly seeking a move away from Barca amid interest from the Chinese Super League as he features less frequently under Valverde ahead of the 2018 World Cup.

"We have not spoken with him. He's working hard so he can be with us as soon as possible," Rakitic added.

"He's an important player for the team and always at a high level. I hope he's with us for a long time. As a person and a player he's very important for the team."