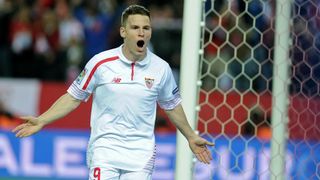 When it comes to their star names, Sevilla's historic Europa League successes have come at a heavy cost.

Captain Ivan Rakitic delivered a man-of-the-match display in the final win over Benfica two years ago and a transfer to Barcelona was sealed within a month. A year later, Aleix Vidal collected another winners' medal before following suit.

And if Kevin Gameiro – who scored the winning penalty in 2014 and featured last year – can fire Sevilla to victory over Liverpool on Wednesday, the Camp Nou vultures may be circling again.

Like Rakitic, Gameiro has caught the eye of Barca after his best season with Sevilla to date, having scored 28 times in all competitions. Like Rakitic, Gameiro has regularly produced at the biggest moments, scoring five times across two-legged semi-finals in both the Europa League and Copa del Rey. And, like Rakitic, he's been earmarked by Luis Enrique as the perfect fit for his specific Barca model.

"It's flattering - that's for sure," Gameiro told Telefoot when asked about the rumours of Barca's enquiries in January. "I am calm and happy at Sevilla. I want to get more done with this group and we will see what happens later."

Sporting director Monchi has voiced his confidence that Gameiro could sign a new contract, but he has too often seen the lure of Camp Nou prove irresistible. Striking a deal with Barca before other offers arrive could even be in Sevilla's best interest: Rakitic's sale saw Denis Suarez arrive, and a similar exchange involving Alen Halilovic has been mooted this time.

Gameiro has had to be patient for this kind of recognition. He is already 29 and, after joining Sevilla in 2013 following a frustrating time at Paris Saint-Germain, the France international was more often used as a secondary striker, utilised for his speed and work-rate to distract defenders.

Ironically, those same qualities have seen him thrive as goalscorer-in-chief since Carlos Bacca left for AC Milan, and drawn admiring glances from Luis Enrique, who is keen to recruit a quality alternative option to support Luis Suarez.

"He has a fantastic turn of pace to get away from players and he's very good at getting shots away quickly – a really sharp finisher," head coach Unai Emery summarised. "He puts the first line of pressure on the opposition, with his speed and ability in transitions; that's very positive for the team."

Gameiro's numbers have never looked better. He has doubled his tally of Liga goals from last season and had a hand in nine (seven goals, two assists) of Sevilla's 14 in the Europa League. His last five games in the competition have seen him score six and set up two more.

The key, he says, is confidence.

"It's the best season of my career," Gameiro told UEFA.com. "The most important thing as a striker is to be confident. This season I feel completely confident, and everyone trusts me too – my team-mates, the club and the coach."

That self-belief will not have diminished before Sevilla meet Liverpool in Basle. Emery's side have again offset league disappointment by making Europa League history with a third successive final appearance, and they end the season with a first Copa del Rey final in six years - intriguingly, against Barcelona.

But that's not enough for Gameiro. "We play football to live this moment," he told BeIn Sports. "I'm very happy and I know I want more. We will give everything to enjoy it."

It wasn't enough for Rakitic, either. "I don't want to dream about lifting the trophy," he said two years ago. "I want to live it."

With Gameiro in the form of his life, Sevilla could live such a feeling twice more this week. If he earns a move to Barca in the process - well, it's a price they have grown accustomed to paying.