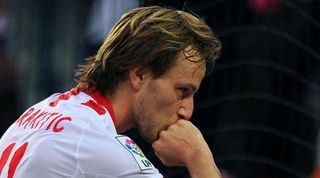 Sevilla won the UEFA Europa League in 2006 and 2007 but Rakitic, who joined the club in 2011, is not allowing himself to dream of European glory just yet.

"All the players worked hard to ensure we got to the final. It's a great moment for us and we need to enjoy it to the maximum and take the positives that we can from it," said the Croatia international.

"I don't want to dream about lifting the trophy, I want to live it. I'm not going to put pressure on the team though because we need to enjoy it.

"If we can get through the match I will be prepared to lift the trophy, but there is still one more tough match before that happens.

"I don't care about being the hero, there's no point in talking about heroes. M'Bia wouldn't have scored his goal without Fazio's assist, for example. It's been a long year but we have worked hard to earn the right to be in this match.

"We are going to prepare for this match well. We will be prepared and we want to play the game of our lives."