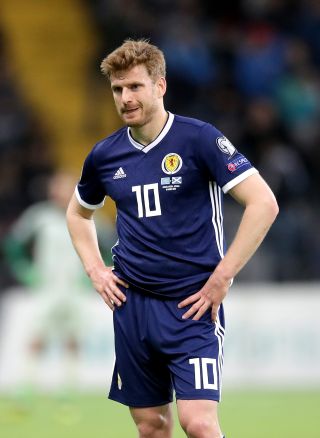 Midfielder Armstrong will miss Saturday’s Premier League opener at Crystal Palace having sustained a thigh problem while playing 80 minutes of his country’s 2-1 Nations League win over the Czech Republic.

Hasenhuttl believes the 28-year-old needs to be carefully managed as his energetic style of play makes him susceptible to picking up niggling problems.

Armstrong, who was also injured playing against Belgium in June last year, started against the Czechs just three days after coming off the bench to make an 11-minute cameo in the draw with Israel at Hampden Park, prompting Hasenhuttl to vent his displeasure.

“He’s coming back from internationals with a quad injury and I’m definitely not happy about that,” said Hasenhuttl, whose plans for Selhurst Park have been disrupted.

“We know about his physical situation that he sometimes needs a little bit more rest before a game because he sprints a lot and he takes a lot of runs.

“You must definitely be careful with him.

“I don’t know what happens with him but I know it’s the second time he’s coming back injured from the international break.

“I know he has had some injuries with us but we tried to handle it, especially when we have more games in a week, to really be careful to not overwhelm him.”

Hasenhuttl is not yet certain of the extent of Armstrong’s injury and is unsure exactly what the former Celtic man was asked to do during his time with Steve Clarke’s side.

The Austrian said Saints’ medical team had been in contact with their Scotland counterparts to discuss the issue.

“I don’t have the stats on what they definitely did there and what they trained there,” he said.

“Hopefully it’s not too bad. In the moment he’s not too bad because he came off after 80 minutes and he had no problems. It came after the game.

“But it’s not perfect for me. Our medical department spoke to them and now know more.”