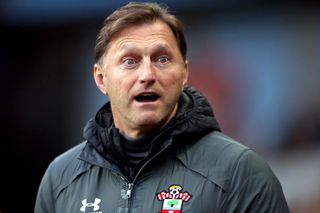 Ralph Hasenhuttl believes Southampton’s players cannot be praised enough for their “absolutely outrageous” response to the 9-0 humiliation at the hands of Leicester.

Saints suffered the ignominy of the joint worst defeat in Premier League history when the high-flying Foxes ran riot at a stunned St Mary’s in late October.

The south coast club have recovered well from the humbling and sit five points clear of the relegation zone ahead of Saturday’s return meeting with Brendan Rodgers’ second-placed side.

Manager Hasenhuttl admits memories of the embarrassment cannot be erased but feels it may have served as a catalyst for major improvement.

“We had a moment we will never forget, that is for sure,” he said.

“Now two months later you must say that this can be an important result for us, especially when we show the right reaction.

“What the team showed after this result – where we knew it was absolutely disaster for us – was absolutely outrageous from the mentality and from the character and fighting back to a successful way.

“Games were coming – not easy games – and we did it really well.

“When you look now how the team’s playing, it looks completely different.

“I cannot praise them enough for the reaction they showed and maybe thank you for this evening because it was an important one for us.”

Southampton’s players and coaching staff each donated a day’s wage to the Saints Foundation charity in the wake of the debacle.

Hasenhuttl retained the backing of his club’s board and has repaid the faith by guiding his team to 12th in the table on the back of 10 points from the last 12 available.

“But I think it was a very, very important one, for me, for the players. We are now in a different moment.

“We are looking forward to every game and we feel that we are more competitive. You can feel that the players are doing well and they like to do it.”

Right-back Yan Valery, who has suffered with an infection and not featured since late November, is the only Saints player unavailable for the trip to the King Power Stadium.

With Valery out and no recognised deputy for first-choice left-back Ryan Bertrand, former RB Leipzig coach Hasenhuttl is determined to strengthen his defensive options during the transfer window but would not be drawn on names of potential targets.

“We are in the market and we are looking for especially full-backs because we know that we have there not that many options at the moment,” said Hasenhuttl.

“This will be definitely a position where we do something in the winter break.

“I don’t want to comment on any names but you can be sure that we have a whole list of what is interesting to us.”

Hasenhuttl has also urged Wesley Hoedt to focus on his loan spell at Royal Antwerp amid reported criticism from the defender.

Holland international Hoedt, who spent the second half of last season with Spanish club Celta Vigo, was quoted by Belgian media as being unhappy at not being given a chance by Hasenhuttl, while expressing surprise the Austrian retained his job following the 9-0 Leicester defeat.

“I heard that he does it well there, I’m happy for him, he’s still our player,” said Hasenhuttl.

“It’s not always possible to give every player a chance to play.

“In the end, I think he should concentrate on his club he is playing in the moment and we are concentrating on our work we have to do.”