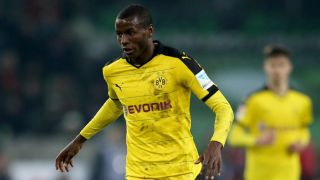 Adrian Ramos scored twice and Marcel Schmelzer returned from injury as Borussia Dortmund beat Union Berlin 3-1 in a friendly at the Stadion An der Alten Forsterei.

The second-tier side, spurred on by impressive home support, took the lead in the first half, but a double from Ramos – who also scored twice in the 4-0 friendly win against Eintracht Frankfurt on January 12 – helped inspire Thomas Tuchel's men to a second victory in as many days.

The Dortmund coach used the friendly as a chance to give time to players that did not start Saturday's 3-1 triumph against Borussia Monchengladbach, but they appeared to be lacking sharpness when Steven Skrzybski put Union ahead with 20 minutes on the clock.

Christian Pulisic enhanced his claim for a regular spot in the first team, following up his goal in the 4-1 friendly success against Jeonbuk Motors by sneaking a shot inside the near post two minutes before the interval.

Ramos put Dortmund ahead in the 57th minute, converting after Schmelzer – featuring for the first time this year after his mid-season break was hampered by a muscular injury – had his effort from an acute angle parried straight to the Colombian by Union goalkeeper Daniel Haas.

The former Hertha Berlin striker made the result more comfortable by netting his second 13 minutes from time and will now be hopeful of reproducing such performances when afforded his next chance in Bundesliga action.