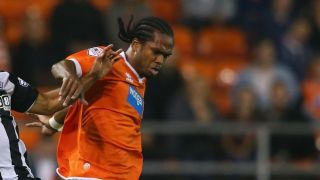 Controversial striker Nile Ranger has taken to social media to express his surprise that relegated Championship club Blackpool have taken the option to extend his contract.

Ranger moved to Bloomfield Road last August in an attempt to rebuild a career that has been blighted by off-field problems.

However, the former Newcastle United man made the last of his 14 appearances for the club on November 29 in a 1-1 draw against Rotherham United.

Former manager Lee Clark stated in December that the striker had gone AWOL and it appeared as though his short time at Blackpool was at an end.

But Ranger posted a picture on his Instagram account that showed an email stating Blackpool had taken up an activation clause in his current contract.

Ranger's post was accompanied by a hashtag that read: "REALLY!?!".

Blackpool endured a miserable campaign in the Championship, and they finished bottom of the table with just 26 points.

Their last match of the season against Huddersfield Town was abandoned when fans invaded the pitch in protest against owner Karl Oyston's running of the club.