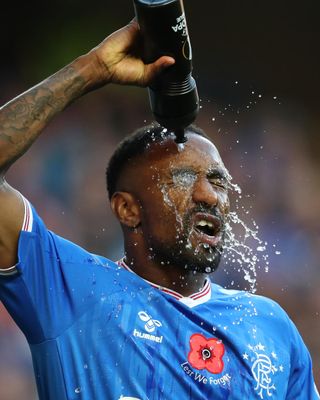 Filip Helander headed his first goal for Rangers as Steven Gerrard’s men came from behind to secure a late 2-1 victory over Motherwell.

Devante Cole opened the scoring in the 21st minute and James Tavernier missed his third penalty of the season as Rangers endured a frustrating first 45 minutes before Jermain Defoe levelled in stoppage time.

The home side improved after the break but Motherwell remained resilient until Helander got above a crowd of bodies to net.

Motherwell handed Bevis Mugabi a first start as they switched to a three-man central defence. Their wide men were sacrificed but Christopher Long joined Cole up front.

The Steelmen could have taken the lead earlier if Long kept a third-minute shot down after a poor clearance fell kindly for him.

The visitors’ three-man central defence were pushing up on Stewart, Defoe and Brandon Barker and allowing their team-mates a decent share of possession.

Rangers were restricted to speculative efforts before Stephen Robinson’s men took the lead after a move down their left. Allan Campbell helped the ball on to Cole just inside the box and he turned and hit a snap shot which wrong-footed Allan McGregor.

Motherwell continued to frustrate their hosts but had a let-off when the ball was flicked on to Peter Hartley’s hand inside the box. Referee Andrew Dallas, who gave Rangers four penalties in one game against St Mirren last season, ignored another, more hopeful, claim when Liam Grimshaw blocked a cross.

Rangers finally got their penalty in the 37th minute, although Liam Polworth reacted angrily towards Tavernier after being adjudged to have brought him down. The Rangers skipper sent Mark Gillespie the wrong way but the ball bounced off a post.

Barker went off with a shoulder injury just after firing wide of the near post from a tight angle. Kent came on.

Motherwell looked set to go into the interval in front as they won a corner at the start of stoppage time. However, Rangers scored seconds after McGregor clutched the delivery and launched the ball forward, although Liam Donnelly appeared to have his heels clipped by Defoe as they chased the long ball.

The striker cut the ball back for Steven Davis who fired a 25-yard strike straight at Gillespie but the Motherwell goalkeeper opted to punch away and Defoe returned the ball inside the near post first time.

Rangers looked far more potent immediately after the interval. Hartley did enough to put off Defoe as he appeared set to head home a cross from Aribo, who soon swept a shot wide himself, and Helander was just too high with a diving header from a Borna Barisic corner.

Motherwell had a good opportunity on the break when Cole set up Long, who shot wide of the near post.

Rangers brought on Morelos who soon set up a chance for Defoe with Motherwell stretched but the former England striker missed his kick.

Hartley soon did well to put off Morelos as Gillespie saved from the Colombian but the goal soon came when Helander threw himself at Tavernier’s corner to head into the corner from around the penalty spot.

Motherwell threw on winger Sherwin Seedorf for Mugabi and pressed for an equaliser but Rangers held firm.