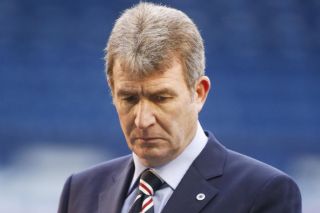 Jardine passed away on Thursday evening, with the club confirming the news on their official website.

"Sandy had been battling bravely against cancer for the past 18 months and was a regular visitor to Ibrox until a short time ago but he sadly passed away peacefully tonight surrounded by his family," a Rangers statement read.

"Rangers has lost a man of dignity, class and honour tonight and the thoughts of everyone at the Club are with his wife Shona, children Steven and Nicola, his grandchildren and friends."

Sir Alex Ferguson, a former team-mate of Jardine's, passed on his sympathies to Jardine's family.

"From Cathy and I, this is some of the worst news we have heard," Ferguson said.

"Sandy was a noble and courageous man. The respect he is held in at Rangers is immense.

"He was one of the greatest players ever to wear the jersey.

"To Shona and family, we express our sympathy and sadness."

Rangers manager Ally McCoist said he grew up watching Jardine ply his trade, and paid his respects to the club legend.

"There have been many great names associated with Rangers Football Club in our 142 year history and Sandy is a Rangers legend in every sense of the word," McCoist said.

"We are all devastated by the news he has passed away, we have lost a great man today.

"I had the privilege of watching Sandy playing for Rangers when I was a young boy, I had enjoyed the pleasure of working with him closely since I returned to the club in 2007 and he was a truly remarkable human being."

Jardine played 451 league matches for the Scottish powerhouse, before adding another 184 Premier League games - plus a two-year coaching stint - at Hearts.

The Edinburgh-born right-back also made 38 appearances for Scotland's national team from 1970-79.