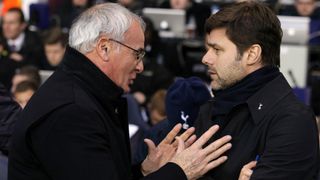 Tottenham have not won a league trophy since 1960-61 but Pochettino and Co. are fourth in the standings and six points behind leaders Arsenal as they prepare to host second-placed Leicester on Wednesday.

And Ranieri, who once tried to sign Pochettino from Espanyol during his time as Atletico Madrid boss in 1999, is tipping the Argentine coach to guide the Londoners to silverware ahead of the midweek showdown.

"Tottenham are very strong in all the areas," said Ranieri, who will face Pochettino for the second time in the space of four days following Sunday's FA Cup third-round tie at White Hart Lane.

"For 10 years they have been building a good team, and now they are ready to fight for the Champions League.

"I think the league is very good at the moment because no-one can say they will win. Nobody can look at the table and say Arsenal to win, or Manchester City to win. I believe also that Chelsea will make the top four at the end of the season.

"It doesn't make it easy [for Leicester], but we are confident in our policy, the owner wants to arrive at the top. Of course it won't be tomorrow, slowly we have to take it step by step."