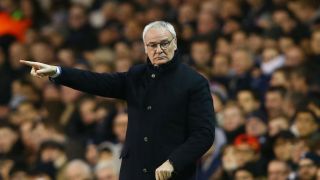 Claudio Ranieri warned Leicester City to remain calm after a 1-0 win at Tottenham sent them level on points with Premier League leaders Arsenal.

This season's surprise package Leicester survived several nervy moments at White Hart Lane as second visited fourth on Wednesday, most notably when Harry Kane's one-on-one effort was saved by Kasper Schmeichel and hit the crossbar in the second half.

Leicester's resilience paid dividends in the 83rd minute, though, as Robert Huth's powerful header from Christian Fuchs' corner sealed all three points and saw Ranieri's side move level with Arsenal - who are top on goal difference.

However, the Italian was keen to stress that Leicester have plenty of work to do in the remainder of the season.

"We wanted to win but we knew it was a difficult match. Tottenham started very well and put us under pressure but we didn't lose our confidence or shape and it was difficult for them," Ranieri told BBC Sport.

"We created some good chances and in the second half it was an open match. We both had chances and we scored the goal.

"We have three clean sheets in a row. Unfortunately it's January, not May. There's so much work to do. We have to remain calm and believe in what we’re doing."

Match-winner Huth says the squad are still struggling to comprehend their brilliant campaign, and paid tribute to Schmeichel's performance in the Leicester goal.

"To be honest we're not sure where this season is going. We keep pinching ourselves but it's looking good for us," the centre-back said,

"I just said to him [Schmeichel] that without him we wouldn't be in that position. It was an awesome save, fortunate that it hit the bar, but it was a great save."