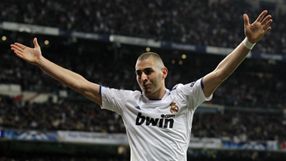 Marcelo, Karim Benzema and Angel Di Maria scored the goals at a packed and rowdy Bernabeu to put the record nine-times winners through 4-1 on aggregate.

Real's smooth passage into the last eight at the expense of the team that knocked them out last season will be seen as a personal triumph for their outspoken Portuguese coach and is his first meaningful contribution to the club since joining from Inter Milan.

"I don't want to make a huge deal out of this match and this qualification," Mourinho said at a news conference.

"Real Madrid is too big a club not to be in the quarters," the former Chelsea manager added.

"We are on the right track, the titles will come, if not this season then next.

"I just work, I do my best. I feel comfortable, I feel happy and I think the players feel it."

Real, whose last Champions League title came in 2002, had failed to beat Lyon in seven previous meetings in Europe.

They had the world's most expensive player, Cristiano Ronaldo, back from injury and the Portuguese tested Lyon goalkeeper Hugo Lloris with a flicked header and a fierce drive as the home side dominated the early stages.

Marcelo struck on 37 minutes when he dashed in from left, exchanged passes with Ronaldo and beat two defenders before firing in off goalkeeper Hugo Lloris's arm.

Benzema, a former Lyon player who scored Real's goal in the first leg, doubled their lead in the 66th when he raced clear and sent a low shot through the keeper's legs.

The France international, who has been coming back into form in recent weeks, blazed just over the bar two minutes later before Di Maria put the tie beyond the Ligue 1 club's reach with another breakaway goal 14 minutes from time.

The French side were ultimately disappointing but had some decent moments in the first half.

Cesar Delgado forced Iker Casillas into a save low to his left when he curled a shot from the edge of the penalty area in the 22nd minute.

With his side 1-0 down at the break, Lyon coach Claude Puel brought on Bafetimbi Gomis, scorer of their goal in the first leg, but the 2010 semi-finalists scarcely came close to troubling Casillas again.