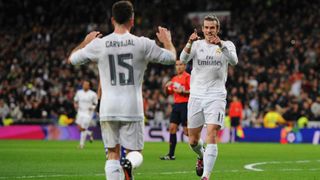 Gareth Bale inspired Real Madrid to an emphatic 5-0 win over Deportivo La Coruna as Zinedine Zidane's new era got off to the perfect start.

Zidane, who replaced Rafael Benitez as head coach this week, was forced to deny rumours that Bale could be sold this month, and the Wales star scored a hat-trick to seal three points for the new boss in front of a vibrant Santiago Bernabeu crowd.

Karim Benzema flicked home the first before Bale doubled the lead in the first half against a Deportivo side who could have given Zidane much more to worry about had some wayward shooting early on been improved.

But Bale promptly killed the game in the second half with a brilliant placed finish and a glancing header to take his tally to 10 goals in his last seven Liga matches.

Depor, to their credit, continued to push for a consolation, but Madrid stretched their lead once more through Benzema to put pressure on Barcelona and Atletico Madrid above them and give Zidane the winning start he wanted.

Cristiano Ronaldo had German Lux at full stretch with the first shot in anger but Deportivo started the brightest, and Keylor Navas reacted well to stop Lucas Perez from snatching the lead from close range with 11 minutes played.

Madrid survived that early scare and got off the mark under Zidane with just 15 minutes played. Sergio Ramos hooked the ball goalwards after Toni Kroos' corner was half-cleared, and Benzema just managed to stay onside before backheeling the ball into the bottom corner.

The home side suddenly looked more comfortable and promptly doubled their lead after 23 minutes, as Bale headed Dani Carvajal's pinpoint cross from the right down past Lux from six yards.

Bale almost turned provider for Ronaldo, the Portugal star heading his delicate chip onto the woodwork, though Deportivo continued to threaten through Perez and Luis Alberto towards the close of an end-to-end opening 45 minutes.

But Madrid put the game beyond the visitors with just four minutes of the second half played. Ronaldo raced clear down the right and pulled the ball back across the box for Bale, whose superb first-time side-foot beat Lux at the near post from 18 yards out and moved him ahead of the 49 goals Zidane scored in a Real shirt.

And the unstoppable Bale secured his hat-trick with a strong glancing header from Toni Kroos' corner, before he was withdrawn to a rapturous reception in the closing stages.

Depor kept pushing for a consolation and Navas leapt superbly to his left to parry Alberto's strike from 25 yards, before Ronaldo dragged an effort wide after charging into the area in what proved a disappointing personal 90 minutes for the Portuguese.

A fine tackle from Alejandro Arribas denied Ronaldo a chance on the counter-attack in injury time but Benzema arrived to smash home the rebound off the crossbar from just inside the box to put the icing on the cake for Madrid and Zidane.