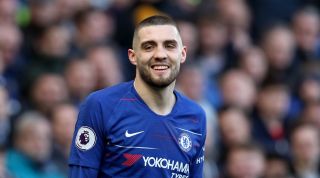 Real Madrid have offered Chelsea the chance to extend Mateo Kovacic’s loan move for another season, report the Daily Star.

However, the proposed deal contains a clause obliging the Blues to purchase the Croatia international for £26m at the end of next term.

Kovacic has dropped out of the Chelsea starting XI in recent weeks, with Ruben Loftus-Cheek impressing in his place.

The west Londoners have yet to make a decision on the Madrid loanee’s future, although matters are complicated by the ongoing wait for a verdict on their transfer ban.

As things stand Chelsea will not be able to sign any new players in the next two windows after a FIFA investigation into their signing of foreign under-18-year-olds.

The club have launched an appeal against the ban, but Madrid’s proposal would allow them to circumvent the punishment if they decide to take up their offer.

Chelsea are fourth in the Premier League table ahead of Sunday’s trip to Manchester United.