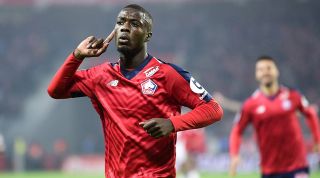 One good season can be a fluke, but two in a row suggests the player in question has the potential to be something special. And Nicolas Pepe is certainly special: the £72 million-rated striker has been sending clubs across Europe into a frenzy, with stories almost every day linking him with the continent's biggest sides. In the end, Arsenal were the ones who were willing to stump up the cash and get a deal done.

The 24-year-old front man achieved devastating form for Lille last season, who finished as surprise runners-up behind champions PSG in the Ligue 1 table. In 2017/18 they narrowly avoided relegation, yet Pepe still managed 13 and six assists in his maiden season at the club.

In 2018/19 he plundered 22 goals and 11 assists, making him one of a handful of players in Europe’s major leagues to reach double figures in both categories.

WhoScored rated him as the third-best player in Ligue 1 last season, and ultimately made the four-man shortlist for the Player of the Season award (where he was ultimately beaten by the 33-goal Kylian Mbappe).

The Mantes-la-Jolie-born Ivory Coast international thrived in a three-man forward line alongside Jonathan Bamba and Jonathan Ikone, and now Unai Emery will be hoping he does the same in his own fearsome attack. The trio’s pace and precision in the opposition half turned Lille into one of Ligue 1’s most exciting sides – and now, alongside Pierre-Emerick Aubameyang and Alexandre Lacazette, opposition sides could be in all kinds of trouble.

Pepe usually operates on the right side of attack, cutting in on his stronger left foot. He’s a quick, fluid mover with and without the ball, has great close control and the ability to create and take chances in equal measure.

The 6ft striker is more than a flat-track bully, too: goals against PSG, Lyon and Marseille show he can do it against the better sides. To see exactly what the fuss is all about, Google his goals against Nice (Feb 2019) or Saint-Etienne (Mar 2019).

Nicholas Pepe shows pace and composure to put Lille ahead once more against the champions-elect. pic.twitter.com/kaGY4J2imv— Football on BT Sport (@btsportfootball) April 14, 2019

Although used mainly out wide, his finishing ability suggests he could be effective as a central striker in the future. The timing of his runs to get behind defenders is excellent, and he keeps a cool head in one-on-one situations.

For all his glorious stats, it’s worth noting that nine of Pepe’s 22 goals were penalties last season. Take spot-kicks out of the equation and his scoring rate drops from a goal every 151 minutes to a more moderate once every 256 minutes.

Accusations of nonchalance have plagued him, too, although his consistency over two seasons now mean such barbs may be a thing of the past for a player who only turned 24 at the end of May.

Lille coach Christophe Galtier: “He doesn’t need an intermediary step before joining a Champions League club. He can go directly into that standard of club given what a fantastic season he’s having for us.”

That hasn't quite proved to be the case, but he'll be hoping Arsenal's continued existence outside of Europe's premier competition isn't to last much longer.

Pepe was a relatively late bloomer. After coming through the ranks at part-time amateurs Poitiers almost undetected, he didn’t play in the French top flight until after his 21st birthday.

His form at Angers persuaded Lille to pay what now looks like a bargain €11 million for him when Marcelo Bielsa was manager in 2017. Watford and Hull had both failed with bids of £7m in January 2017.

Lille turned down a €30 million bid for him from Lyon on transfer deadline day last August – and their refusal to sell now looks like one of the club’s smartest decisions in the past decade.

ACTION REPLAY The craziest season in English football: when the champions got relegated and ‘Lucky Arsenal’ annoyed the nation