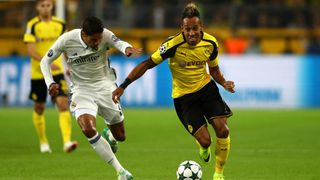 The Gabon international has said on a number of occasions that he would relish the chance to play for the reigning European champions, having promised his grandfather that he would one day make the move.

Tuchel has little desire to allow the forward - who has scored 18 goals in as many appearances this season - to leave Signal Iduna Park, claiming he brings out the best both in his team-mates and his coach.

He does, however, expect the 27-year-old to thrive under the pressure of wanting to make a good impression in the Spanish capital, especially after he scored in the 2-2 draw between the sides in September.

"Aubameyang is a great player. He makes the side better, he makes me better and we can't achieve our objectives without him," the Dortmund boss told a media conference.

"He's a quality player. All players would love to play in the best sides in the world, and one of those clubs in Real Madrid. It's always a pressure to play at the Santiago Bernabeu and he likes pressure and it often brings the best out in him."

Dortmund can guarantee top spot in Group F if they avoid defeat - a scenario that would potentially grant them an easier draw for the last-16 stage.

Tuchel, however, says the important aspect about winning the group is that it will provide his players with belief in their abilities.

"The important thing of being first in the group is to prove you deserve to be first," he said. "The confidence of winning or drawing here at this level, with this atmosphere... that is the value of winning group.

"When you focus solely on the result many unforeseen things can happen. We know how things are, we have the possibility to play with no pressure thanks to the starting point we have. We know we can play to win, to draw, even losing we go through to the next round. It will be a good match to measure our level, to keep on growing and improving."

There are some concerns for Dortmund ahead of the match, however, with Marco Reus struggling with illness and full-back Raphael Guerreiro expected to be out with a muscle problem sustained on international duty with Portugal.

"Marco has a cold. He is not 100 per cent - we have to bear that in mind," Tuchel explained. "At midday [on Wednesday], I will make that decision. The best thing would be for him to start. He is an exceptional player.

"Raphael has always been decisive in important moments. It is very difficult for us to replace him. We need to find solutions that are not obvious.

"We are really going to miss him, the problem comes from a muscle injury with his national team. We felt he might be able to return to train on Sunday, but he didn't feel so good."