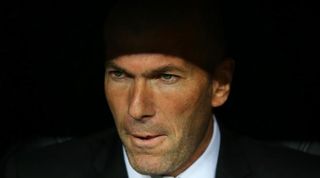 It emerged on Monday that the Spanish Football Federation's (RFEF) Competition Committee had suspended Real Castilla boss Zidane for three months due to the 42-year-old not holding the necessary qualifications for the role.

However, Real released a statement later in the day insisting they will aggressively fight the RFEF's decision on the basis that Zidane has obtained the required qualifications in his homeland, France.

The statement read: "In response to the sanction handed down by the Competition Committee to the Real Madrid Castilla's head coach and second coach, Santiago Sanchez and Zinedine Zidane respectively, Real Madrid C. F. would like to outline the following:

"1. The club's absolute disagreement with the decision, not least of all because Zinedine Zidane has been authorised by the French Football Federation to work as a head coach in the category Real Madrid Castilla currently find themselves in, as the certificate issued by said Federation from 13 October 2014 states.

"2. Real Madrid will pursue every available legal avenue so that this decision is overturned."

Real and France legend Zidane took charge of the club's B team in the close-season after serving as first-team boss Carlo Ancelotti's assistant last term, but Spain's national association of coaches reportedly filed a complaint to the RFEF on the basis that he only carries a UEFA A licence.

In the Spanish system, that represents the equivalent of a Level 2 qualification - one below the requisite grade required to manage in the Segunda B division.

Apparently in anticipation of a potential problem, Real officially named Zidane's right-hand man Santiago Sanchez - holder of a Level 3 license - as the Castilla head coach in the close-season, but it is commonly known that the Frenchman is in charge.