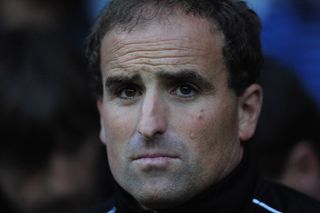 Sociedad look set to claim a berth in the Champions League group stage for the first time in a decade after beating Lyon 2-0 away from home in last week's first leg.

Despite the handy advantage, Arrasate insisted the club will be firmly focused on Wednesday's second leg to ensure they progress.

"Maybe outside the club it has been euphoria, but inside it hasn't," Arrasate said.

"When the game finished we were happy, but at the same time cautious.

"Afterwards we were focused on the (league) game against Elche, and now it's time to focus on Lyon, but we are absolutely aware we have to play another great match if we want to go through.

"So inside the club there has not been any euphoria."

If Sociedad needed any extra motivation, this game gives them the chance to exact revenge on the club that ended their last European campaign.

The two sides met in a last-16 tie in 2004, the only other occasion Sociedad made it to the group stage, with Lyon winning 2-0 on aggregate.

This time it is Sociedad who are on top, but Arrasate is still wary of their French opponents.

"We know we have a two-goal advantage, that it is important," he said.

"In the first match we were able to contain Lyon and, in part, that was a credit to our team.

"We are aware of our advantage, but we are cautious, because we know we have to play another good match to succeed."

Lyon coach Remi Garde, meanwhile, said his side will be going all out to turn the tie around.

"We didn't show up for the first game. But tomorrow's second leg will be a different story - we will try to play as well as Real Sociedad did during the first leg.

"But whatever happens, the club will remain strong after this match. We hope to advance to the group stages and we will work on a plan to achieve that aim."