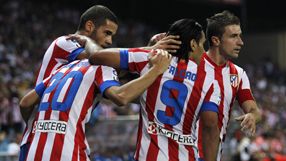 Under inspirational coach Diego Simeone, the Europa League champions have made their best start to a domestic campaign since winning La Liga and the King's Cup in 1996 when the Argentine was a hugely-popular player at the club.

Atletico are level on 19 points with Barca at the top of the table having won six games and drawn one and in Colombia striker Radamel Falcao they have a genuine goal-scorer to compliment their creative midfielders and gritty defenders.

Falcao fired Atletico ahead in the sixth minute at the Calderon on Sunday, his eighth league goal of the season, before Roque Santa Cruz levelled for third-placed Malaga half an hour later.

The game was heading for a draw when Falcao threw himself into a challenge close to the Malaga goal in the 90th minute and the ball diverted into the net off defender Weligton.

Ecstatic Atletico fans poured out of the stadium after the final whistle, chanting "Ole, ole, ole!".

Simeone said the supporters should enjoy the moment during this week's international break without getting carried away.

"Today is an important day for the Atletico family," he told a post-match news conference.

"We are in a privileged position in the Spanish championship after many years of not seeing ourselves in this situation," added the former Argentina captain.

"The reality is that we are going well and we need to focus on each game at a time."

Atletico play at city rivals Real in the first weekend of December before a trip to Barca two weeks later.

The heavyweight pair were both left chewing over what might have been after Sunday's 'Clasico' at the Nou Camp ended in a 2-2 stalemate.

A win for Barca would have stretched their lead over their great rivals to 11 points, possibly killing off Real's title defence.

It would also have boosted Barca's bid for a fourth La Liga crown in five years.

A Real victory would have reignited the title race and given Jose Mourinho's side a huge psychological lift before the players head off to play for their various national sides.

"We deserved a lot more and we always want more when it comes to our eternal rival," said Barca playmaker Xavi.

"The eight-point gap to Real in the championship will give us a certain calm in tackling our future objectives," added the Spain international.

Real fully deserved their point on Sunday having made the better start to the game and taken a 23rd-minute lead through Cristiano Ronaldo.

The game then became a personal duel between Ronaldo and the man who replaced him as World Player of the Year, Lionel Messi.

Messi levelled in the 31st minute with a close-range volley before firing Barca ahead just after the hour with a stunning free-kick.