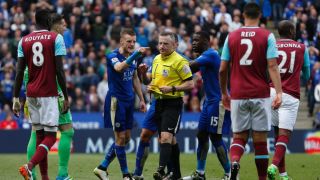 Beginning this season, red cards will now be issued to players who aim offensive or abusive language or gestures at referees during matches.

Yellow cards will be shown to any player who runs to confront an official about a decision, while a referee may book at least one player if they are surrounded by two or more team-mates.

Behaviour in technical areas will also be more strictly enforced as part of the plans to curb poor conduct, which the Premier League claims has reached "unacceptable levels".

The highest number of yellow cards accrued by one team for dissent in the Premier League last season was West Brom, who picked up nine.

"We and our clubs have been discussing for some time concerns that certain elements of player behaviour are overstepping the mark and it is our collective position that these types of behaviour should no longer be tolerated," said Premier League chief executive Richard Scudamore.

"Things happen in the heat of the moment during fast and highly competitive football; we still want to see the passion fans enjoy and demand, but players and managers have to be aware there are lines that should not be crossed."

According to the statement, offences which could earn a yellow card now include:

Red cards will be shown when:

- Players confront match officials and use offensive, insulting or abusive language and/or gestures towards them
- Players use physical contact with officials in an aggressive or confrontational manner