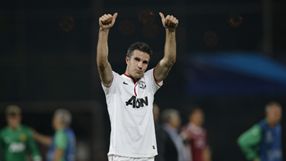 The prolific Dutch international striker made it seven goals since joining United before the start of the season as his double helped the visitors make it two wins from two in Group H.

United had to come from behind after Pantelis Kapetanos fired the Romanian league champions into a 14th minute lead but Van Persie equalised 15 minutes later when he met Wayne Rooney's free-kick and the ball looped off his shoulder and over keeper Mario Felgueiras.

There was nothing fortunate about his second goal four minutes after the break, the striker showing a deft touch to sublimely flick Rooney's delivery past Felgueiras.

"The pass and the finish were equally good [for the second goal]," purred United manager Sir Alex Ferguson who declared his intent from the start by fielding the attacking trio of Rooney, Van Persie and Javier Hernandez.

Rooney and Van Persie were starting a match together for the first time.

"We have good combinations over quite a few of our players. I think the strength of our squad is in attacking positions," Ferguson told reporters.

United, who failed to get out of their group last season, are now well-placed to advance this time.

"We started badly but we got a good result. It's not easy to come back especially when you're away," said Ferguson.

"They played with determination and it was a very tough match."

The Premier League side had kept clean sheets in seven of their last nine away games in the competition and although Ferguson had voiced defensive concerns after his side conceded three in losing to Tottenham Hotspur at Old Trafford on Saturday, the Scot was happy with Tuesday's improvement.

"I have got to be pleased with the possession and the concentration was really good tonight," he said.

"Apart from the goal I thought we defended very well. David [de Gea] made a good save towards the end. It's never easy and they have a good home record here."

Cluj, who beat Braga in their opening game, looked set to give United a difficult evening when they took the lead after a bright start.

A cross-field pass found Modou Sougou on the right and he easily brushed aside Patrice Evra and crossed for Greek international Kapetanos to net.

The lively Sougou went off injured midway through the first half and United, without experienced midfielders Ryan Giggs, Michael Carrick and Paul Scholes, gained momentum.

Van Persie levelled and then saw Felgueiras block another shot before Rooney glanced a header wide.

United's second goal appeared to knock the stuffing out of Cluj but Spanish keeper De Gea came to his side's rescue at the end when he beat away Rafael Bastos's header.

"I was really hoping for a positive result," Cluj coach Ioan Andone said. "We dominated early on when we were fresh but then United put us under pressure and we began to make mistakes.

"We were pushed into the box and made errors