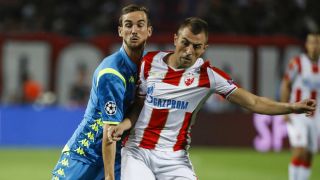 Red Star Belgrade marked their return to Europe's grand stage with a battling 0-0 draw against a frustrated Napoli at Rajko Mitic Stadium on Tuesday.

The highly fancied visitors probed patiently from start to finish but were unable to deny the Serbian champions a hard-earned point on their first appearance in the competition for 26 years.

Though Lorenzo Insigne and Mario Rui both struck the crossbar either side of half-time, it was a largely unconvincing way for Napoli to commence their Champions League campaign.

Carlo Ancelotti may instead have to manufacture positive results against both Liverpool and Paris Saint-Germain if his team is to escape a tough Group C.

0 - This only the third match in the history of modern Champions League in which Napoli haven't scored. Caged.September 18, 2018

Napoli's command of possession translated into few early scares for Red Star outside of an audacious Insigne rocket that came back off the woodwork.

Though his defence was under constant examination, Milan Borjan only had one real save to make before half-time, the goalkeeper smartly covering his near post to block Arkadiusz Milik's first-time effort in the 29th minute.

Napoli were again frustrated by the frame of the goal when Mario Rui skimmed a free-kick off the top of the bar soon after the restart as opportunities for the opener began to flow more regularly, Jose Callejon next having a mishit finish cleared off the line by Milan Rodic.

But genuine chances were ultimately too few to deserve a winner and the Serie A side could themselves have been punished late in proceedings, David Ospina up to the test of a Richmond Boakye shot from the edge of the area.

What it means: Napoli not yet a threat

Napoli, at least on this evidence, seem destined to finish third in their group for the second season running.

They found it tough to slice open an opponent that showed little interest in attacking and do not yet appear a credible danger to denying Liverpool or PSG a place in the knockout rounds.

Pat on the back: Rodic a rock

Part of Serbia's World Cup squad, Red Star defender Rodic seems sure to add to his two international caps if he maintains the form of this excellent display.

The left-back was a steadying influence throughout the contest and produced two vital interceptions in the second half, the latter a match-saving clearance off the line from Callejon.

Boot up the backside: Milik not the right man

Poland striker Milik will be disappointed not to have made more of an impression with a starting opportunity ahead of Dries Mertens.

The 24-year-old cut an isolated figure despite his side's dominance, and should have done better with a rare sight of goal midway through the first half.

- Red Star have not won any of their previous nine matches in the European Cup/Champions League against sides from Italy (D5 L4).
- Red Star have seen just two goals in their last six European matches (exc. qualifiers), with the Serbian side scoring once and conceding once.
- Red Star have kept a clean sheet in each of their last four European group stage matches, although they’ve only scored once in that period.
- Jose Callejon created seven goalscoring chances for Napoli against Red Star; a club record in the competition for a player.

Red Star return to domestic duty on Sunday to meet city rivals Partizan Belgrade in the Eternal derby, while Napoli will hope to rediscover winning form in a trip to Torino.