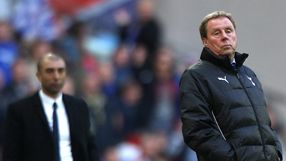 His side were trailing 1-0 in the 49th minute when Juan Mata's shot in a crowded penalty area was blocked on the line by a combination of Spurs goalkeeper Carlo Cudicini and Chelsea's prone skipper John Terry but was awarded as a goal by referee Martin Atkinson despite furious protests.

Even Terry conceded afterwards that the goal should not have stood as for the second season running Tottenham got the rough end of a goal-line decision against Chelsea.

"The second goal was a disaster wasn't it?" Redknapp, whose side were beaten 2-1 at Stamford Bridge in the Premier League last season when Frank Lampard scored with an equaliser that did not cross the line.

"He didn't do it on purpose but I don't see how he can give it because it was nowhere near over. It wasn't like someone had kicked it away and it's so quick, there were bodies in front lying on the line. It was impossible for the ball to go over."

Last month, Queens Park Rangers manager Mark Hughes was left seething after his side were denied a clear goal in a 2-1 defeat against relegation rivals Bolton Wanderers.

While Chelsea's Frank Lampard also has bad memories of his "goal" not being awarded in the 2010 World Cup finals against Germany despite replays showing it clearly bouncing over the line.

"We need goalline technology. It has to happen," said Redknapp. "You can't keep having situations like that where important decisions are not correct. I could tell by the players' reaction that it wasn't right and then I saw the TV and it's clearly not in."

While the technology debate rumbles on and governing body FIFA trials various systems Redknapp, who said Atkinson had admitted his mistake, refused to lay all the blame on the controversial second goal.

"I came in at half-time and didn't feel we deserved to be behind because we were the better team, we hit the post and had better opportunities. Then [Didier] Drogba scored a wonder goal and there was very little we could do about that but I felt we could get back in the game," he said.

"I'm not going to say that's why we got beat but if we are not 2-1 behind I'm not chasing the game and we wouldn't have opened up as we did," he said.

"In this case we were on the lucky side but many times before we have had the game going against us," he told reporters. "But we didn't score two we scored five.

"I've talked before about the consistency of using technology. But we had scored one already and then we scored some more after so I don't think it changed the match."

After a relatively poor season in which Chelsea are down in sixth place in the Premier League, things are suddenly looking brighter at Stamford Bridge with a third FA Cup final in four seasons to look forward to and a mouth-watering Champions League semi against European champions Barcelona.

"I think the team has responded really well to the changes and it's credit to them the way they are performing and conducting themselves," Di Matteo said.

"Winning brings that positivity within the team and confidence in every individual player."

While Chelsea seek silverware, Tottenham are still favourites to finish fourth and earn a crack at Champions League football at Chelsea's expense.

"We have to pick ourselves up and get fourth spot," Redknapp said. "I still feel we can do it, but we have to pick a team with the nerve and the willpower and desire to go