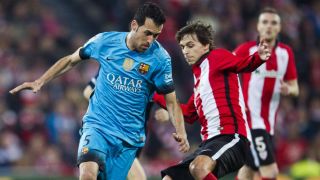 Sergio Busquets questioned the consistency of referee Gonzalez Gonzalez and claims he showed the players no respect in Barcelona's Copa del Rey win over Athletic Bilbao on Wednesday.

Barcelona players were upset with the match official in their 2-1 win and believe he did not show enough consistency when making decisions.

One particular call that drew the ire of Busquets was when Barcelona captain Andres Iniesta was shown a yellow card late in the first-half.

"Andres went to talk with the referee, he did not say anything to him, and he's given him a yellow," Busquets told reporters.

"Later, the Athletic players did the same thing, and he gave them no cards.

"He doesn't have the same approach for both sides, we saw this already against Espanyol.

"At best you can say it is the referee committee's fault, but we gave him respect and he gave us none back."

Gonzales handed out nine yellow cards during the contest, with six going to Athletic players and three to Barca.

The second-leg of their quarter-final clash will take place next Wednesday at the Camp Nou.