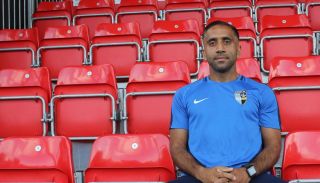 Riz Rehman hopes the next generation of footballers will be better equipped to deal with tackling racism on and off the pitch as the work continues at grassroots.

Rehman, the brother of former Fulham, QPR and Bradford defender Zesh, has been appointed as the new chair of the Surrey Football Association’s Inclusion Advisory Group.

The 36-year-old came through Brentford’s youth system before serious injury ended his own playing career at 21.

📢 Surrey FA is delighted to announce the appointment of The @PFA's Riz Rehman (@RizRrehman) as the new chair of our Inclusion Advisory Group (IAG).— Surrey FA ⚽ (@surreyfa) September 4, 2019

Having obtained his FA Level 2 and UEFA B coaching qualifications, Rehman is also an education adviser with the Professional Footballers’ Association.

Rehman hopes he can now help “join the dots” with his work at the IAG, an independent body which provides advice on matters of equality, diversity and inclusion to ensure children, young people and adults of all backgrounds and communities can access high-quality opportunities across grassroots football.

The battle against racism and for continued education, Rehman believes, has to begin at the very bottom if progress is to be made throughout the game as a whole.

“It all starts at the grassroots really, where you need people who are passionate about the game as well as inclusion and diversity issues,” Rehman told the PA news agency.

“Hopefully as young players move up the ladder and become scholars, then on to being professionals as well, they will all be better equipped to deal with any racism and discrimination.”

Rehman continued: “Of course racism still exists in football, as it does in society – however it is about how you come through that adversity which is what defines you as a person and a player.

“Growing up you get called a ‘paki’ on the pitch – but for me I didn’t let it affect me and nor did my brother.

“We just get on with it, because at the end of the day we just wanted to become professional players no matter what barriers or hurdles were in front of us.

“We did whatever we could to get over and around those. Now it is a bit different because players can report it, and it can get dealt with – but back in the day who would you report it to?”

Our members have high profile accounts and are often a target for abuse. We are calling for extended protection for our members on social networks and we believe the proposals below will be important and applicable for all users.— PFA | Professional Footballers' Association (@PFA) September 4, 2019

The PFA has now called on the social media companies to provide “extended protection” for footballers on their platforms in a bid to curb racist abuse.

Manchester United stars Paul Pogba and Marcus Rashford and Chelsea pair Tammy Abraham and Kurt Zouma have all been racially abused on social media in the opening weeks of the new season.

“I totally agree that the social media companies, the people that are running them, need to deal with it. Unfortunately, the platforms, like Twitter, have allowed it,” Rehman said.

“I think it’s a great way for players to connect with the fans and share their stories, after the game and what they have been doing in their spare time as well – but it is too easy for someone to be discriminated against and for people to be getting away with that.

Raya Ahmed has recently qualified for her coaching badges with Surrey FA and taken up a job at the Palace For Life Foundation, the official charity of the Premier League clubs, working with female players.

Despite the current high-profile examples of continued discrimination, the 21-year-old feels there can be a positive outlook for inclusion across the game.

“When I tell people what I am doing, they all think it is excellent, that I can help inspire a lot of others, and to just keep on going,” she said.