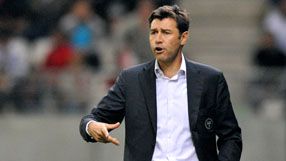 "Do we have nothing to lose in Paris? Well, we actually do. Did the League say no points were awarded in this game?"

"We've already quite a few points in our bag, it's like a safety net," said Reims defender Anthony Weber.

"So we'll just go out there to have some fun and try to cause an upset."

PSG have won four of their last five Ligue 1 games with Sweden striker Zlatan Ibrahimovic netting two spectacular goals in the 2-2 draw at Marseille in their last match.

Coach Carlo Ancelotti will have to make do with the absence of Italian holding midfielder Marco Verratti, who is suspended.

Marseille also take on another promoted side as they travel to Troyes on Sunday.

Unlike Reims, Troyes have found life difficult back in the top flight and are bottom on two points.

"They may feel they have nothing to lose," the French international warned on his club's website (www.om.net).

"This game could be a trap."

Coach Elie Baup is determined to keep his side grounded.

On Friday, sixth-placed Girondins Bordeaux look to extend their unbeaten start when they host Lille, who have won only one of their last five games in all competitions.

Third-placed Olympique Lyon host Stade Brest on Sunday while Corsica gears up for a heated derby between AC Ajaccio and promoted Bastia.