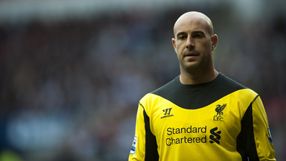 In an attempt to motivate his players, Rodgers revealed that the envelopes contained three names of players who will let the side down this season.

The method has drawn criticism from certain quarters, but Reina has praised the motivation technique.

He told Spanish radio station Onda Cero: "I never feared being in the envelope. No one can ever put my name in an envelope because of a lack of attitude or commitment.

"It was a motivational speech designed to make sure we were focused and tuned in all year. It's the first time I have seen a manager do that and, personally, I liked it. It stands out."

Speaking about Liverpool's recent performances, Reina admitted that there have been moments when they have been very good, but he recognised the need for improvement.

"We are trying to impose a new style with a new manager and that takes time.

"There are mistakes at times because it's not easy, but I prefer to make mistakes trying to do what the manager wants and trying to do the right thing.

"We're optimistic that sooner or later we'll be fighting near the top again."